Carbon nanomaterials such as carbon nanotubes (CNT) and reduced graphene oxide (RGO) have become the materials of interest due to many desirable properties. A nanocomposite containing both CNTs and calcium oxide (CaO) or quicklime is beneficial since the high conductivity of CNTs are favourable for electrochemical detection and Cao may increase thermal stability. Additionally, it has been shown that the performance of CNTs or RGO alone in applications such as electrochemical detection is constricted due to agglomeration of both materials caused by n-n interactions. Decorated nanomaterials and nanomaterial hybrids have also demonstrated better performance as sensor platforms compared to the base materials. In this work, CaO-supported catalysts (Ni/CaO, Co/CaO and Fe/CaO) were used to synthesize carbon-nanotubes quicklime nanocomposites (CQNs) via chemical vapour deposition (CVD) of hexane with studies on the effects of catalyst composition and CVD temperature. The CQNs were then characterized using X-ray diffraction (XRD), Raman spectroscopy, nitrogen adsorption desorption isotherms, field emission scanning electron microscopy (FESEM), transmission electron microscopy (TEM) and thermogravimetric analysis (TGA).

Using Ni/CaO 10 wt%) (800 °C) Co/CaO (15 wt%)  (800°C) and  Fe/CaO (20 wt%)  (850 ° ) catalysts produced CQNs with the highest graphitization possessing IG/ID values of 1.30, 1.15 and 1.36, respectively . As SPCE modifier, the CQNs showed relatively high CV response compared to the bare electrode namely HNi10-800 HCo10-800 and HFe15-900 as indicated by their high anodic peak current values and low peak-to-peak potential separation, AEp. However, graphitization can be correlated with high electrochemical performance  only  for Ni/CaO and  Co/CaO catalyzed CQNs since for Fe/CaO catalyzed CQNS others foctors may attribute to the electrochemical performance. When compared to MWNT-modified SPCE the CV response of the HNi10-800- modified and HFe15-900-modified SPCEs displayed comparable electron transfer and they also exhibited higher anodic peak currents.

Both RGO-CN nanoocomposites (RG0-HNi and RGO-HFe) showed increased CV response when they were used to modify SPCE. It can be seen that the modification of SPCE using RGO-CQN show better electrochemical response than using only RGO. It was also found that the RGO-CQN-modified SPCEs presented higher electroactive surface area compared to RGO-MWNT-COOH modified SPCE. The AgNPs grown on the RGO-Ag hybrids as observed from TEM and FESEM micrographs were polydispersed with the lowest mean diameter of around 20 nm for RGO-Ag5 (5 mM Ag).  RGO-Ag10-modified  SPCE displayed the highest CV current for all RGO-Ag synthesized in this work, presumably due to its better reduction and well dispersed AgNPs. However, RGO-Ag were found to be unstable on the SPCE surface. Meanwhile, RGO-Ag/MWNT-COOH-modified SPCE showed slower electron   transfer due to significant increase in the peak potential separation but the stability of RGO­ Ag/MWNT-COOH on SPCE is better compared to RGO-Ag.

Based on this work, the suitable material for SPCE modification would be CNT­-Quicklime nanocomposite synthesized using Ni/CaO (HNi10-800) and Fe/CaO (HFe15-900) and RGO-CQN as they presented relatively hligh CV currents and low AEp values incdicating fast electron transfer. It is anticipated that the carbon nanomaterial-modified electrodes from this work can be used for the electrochemical detection of heavy metal ions. 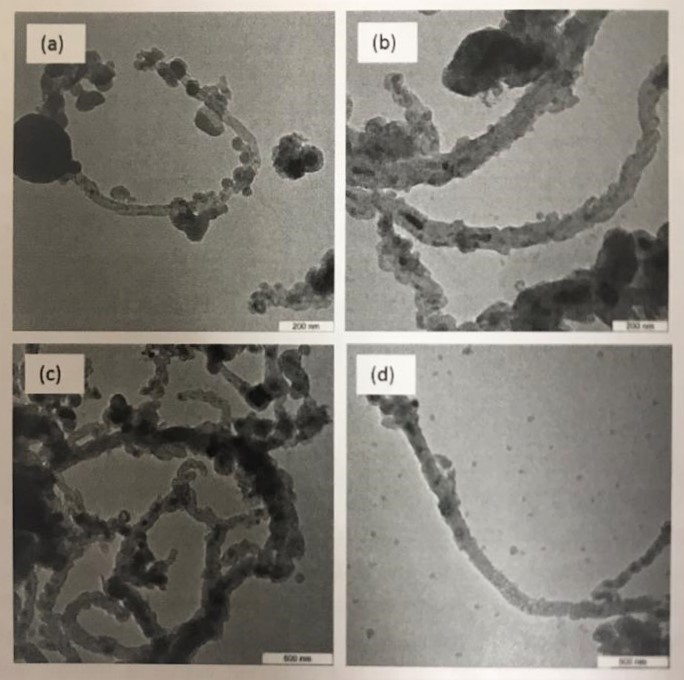 *Abstract of the thesis (Doctor of Philosophy) by Ruzanna Ibrahim